Home / About KWI / KWI Board Emeriti and Associates / Chelsea Ballard 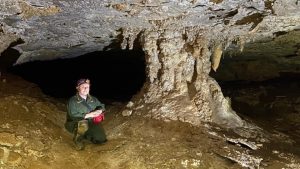 Chelsea Ballard is currently an associate with the Karst Waters Institute as the outreach coordinator. She grew up on a farm in the karst region of south-central Kentucky and after being exposed to sinkholes and caves it led her to study the subject of karst. Currently, she is a student at Western Kentucky University (WKU) studying karst geoscience.

During her time at Western Kentucky University, Chelsea completed two research projects on carbon transport and tracing in karst environments with funding through grants. Chelsea assists WKU with the Karst Field Studies program, is one of the founding members of the United States Biosphere Network Youth Board and a representative for the Mammoth Cave Biosphere Region. She serves as the Volunteer Coordinator with the National Speleological Society and the American Cave Conservation Association.  Chelsea has taught a cave conservation and karst management class at Texas Hydro-Geo Workshop in Boerne, Texas. She completed a physical science technician position with the National Park Service at Mammoth Cave National Park. She has also worked as a cave guide with Diamond Caverns, Hidden River Cave and Mammoth Cave National Park. Chelsea is currently writing a children’s book centered around the subject of karst.