Home / About KWI / KWI Officers and Board of Directors / Bill Jones 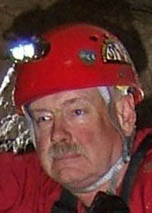 William “Bill” K. Jones is has served continuously on the KWI Board since its inception. Bill holds a B.S.F. degree in Forest Management from West Virginia University and an M.S. degree in Environmental Science (Hydrology) from the University of Virginia. He was an adjunct professor of hydrology at the American University, Washington, D.C. He is a Fellow of the National Speleological Society. He studies physical hydrology of surface and ground-water resources with an emphasis on areas underlain by carbonate (karst) aquifers. He has studied karst areas across North America, France, Eastern Europe, China and Southeast Asia. Bill is the author of over twenty papers on karst hydrology and water tracing. He is the author of the “Karst Hydrology Atlas of West Virginia” (1997) and served as the guest editor for a special issue of the National Speleological Society Bulletin on water tracing using fluorescent tracers (1984). He wrote the chapter on water tracing for the “Encyclopedia of Caves” (2005). He is the first author of “Recommendations and Guidelines for Managing Caves on Protected Lands” (2003), prepared for the U.S. Department of the Interior. He is a consultant to the US Army Environmental Center on the remediation of hazardous wastes in karst aquifers on military bases. He also studies ground-water movement in fractured aquifers and statistical characterization of water resources. Current research projects include the problems of instrumenting small catchments for measuring precipitation and flows for water balance studies. He and his wife Lee Elliott reside in Chimney Run Farm in Bath County, Virginia, where he runs his own hydrology consulting firm, Environmental Data.