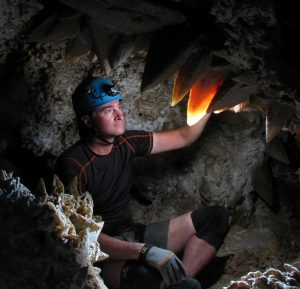 Dave Decker is the CEO and principal geologist for Southwest Geophysical Consulting, LLC, a service-disabled, veteran-owned small business specializing in geophysical cave and karst location services, karst monitoring, and cave mapping. Dr. Decker holds a Ph.D. in Earth and Planetary Sciences from the University of New Mexico with emphasis in hypogene karst, and a M.Sc. in applied physics from the Naval Post Graduate School in Monterey, California. Decker started his career in the U.S. Navy as an enlisted Fire Controlman, during which time he operated, maintained, and repaired missile and gun fire control radars on board several different ships. During his first shore tour, he completed a B.Sc. in adult education and then applied for Officer Candidate. He was quickly accepted and advanced to Ensign upon completing Officer Candidate School. Dave then finished out his Naval Career as a Naval Flight Officer flying a variety of aircraft from various aircraft carriers, retiring as a Lieutenant Commander. On his off time, he went caving all over the world. He has been a caver since his introduction to wild caving at Buckner’s Cave in Indiana while in high school. He has been a member and officer of many different grottos around the country, served a term as a director with the National Speleological Society, and is currently a director with the Karst Waters Institute.  Dr. Decker’s goal at KWI is to broaden public knowledge about cave and karst processes and bring together the many different cave and karst entities so that each may complement the other in the work that they do to bring caves and karst to the forefront in the many disciplines which are impacted by these diverse processes.