Home / About KWI / KWI Officers and Board of Directors / Dr. Julian “Jerry” Lewis 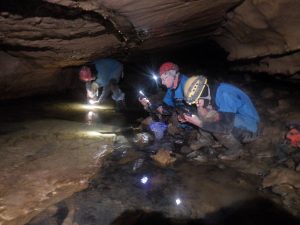 Julian J. “Jerry” Lewis, Ph.D., and his wife Salisa L. Lewis, M.S., own and operate a biological consulting company that deals exclusively with the evaluation of subterranean habitats and fauna, with particular focus on rare and endangered species. Projects vary from environmental assessments associated with large-scale engineering projects (e.g., construction of interstate highways or municipal water plants) as well as work for state and federal agencies and private organizations (e.g., The Nature Conservancy). Jerry’s education includes an M.S. and Ph.D. in aquatic biology, plus B.S. degrees in photography and, most recently, French. He has published over 100 manuscripts on subterranean biology in peer-reviewed journals and a variety of books. He has been a member of the National Speleological Society (NSS) for 50 years, where he and his wife are the Associate Editors for Biology and Conservation for the Journal of Cave and Karst Studies. He received the NSS Science Award for lifetime achievement and is a Fellow of the NSS. Jerry retired from 13 years as President of the Indiana Karst Conservancy to accept a seat on the Board of Directors of the Karst Waters Institute.

Jerry’s primary research interest is invertebrate zoology, with his focus for almost five decades being the evolution and zoogeography of subterranean isopod crustaceans. Much of his research has involved the Smithsonian National Museum of Natural History, where he is a Research Associate. For the last six years he has been working with colleagues at l’Université Lyon 1 (France) on the molecular phylogenetics of asellid isopods around the world. Closer to home he has been working with the groundwater isopods of Virginia for most of his career and is currently writing a book on cave, karst, and shallow groundwater isopods of Virginia and the adjacent Appalachians.