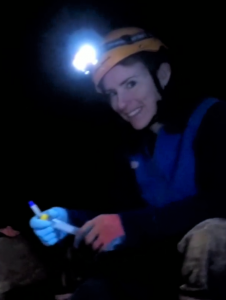 Sarah K. Carmichael is a Professor in the Department of Geological and Environmental Sciences at Appalachian State University of Boone, North Carolina. Her training in mineralogy and petrology gives her analytical expertise that supports her investigations of the origin of manganese oxide deposits in caves and wetlands in the southern Appalachians, as well as porosity development in carbonate reservoirs. Her work involves chemical analyses, mineralogical characterizations, and biomineral analyses. She has served as a Councilor for the Mineralogical Society of America, is a Fellow of the Explorers Club, is a National Geographic Explorer, and was recently named one of the Explorers Club 50 (“Fifty People Changing the World that the World Needs to Know About”).

Her contributions to the scientific understanding of cave biomineralogy as influenced by human-introduced organic matter have been made in publications in Environmental Microbiology Reports, Biogeochemistry, Geomicrobiology Journal, the Life in Extreme Environments series, and the Journal of Cave and Karst Studies. Sarah is a truly interdisciplinary scientist with a special commitment to public outreach and education. In addition to her involvement in KWI specialty conferences, she is in charge of the KWI website and online conference registrations. She won the KWI Distinguished Service Award in 2020.