The Karst Award is an award given annually to an outstanding member of the cave and karst field. 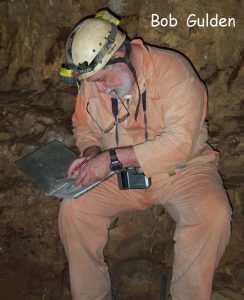 Bob Gulden started caving in 1964 while living on Okinawa, Japan. He joined the Baltimore Grotto and the NSS in 1971. Bob was active with surveying the Friars Hole Cave System in West Virginia and started a “Cave List” in 1976 to track how the Friars Hole System stood in the world record in terms of length and depth. Bob found the book “Great Caves of the World” and used that as the starting point for his list. He took over the list maintained by William B White as a project of GEO2. Bob was working at the NSA Godard Space Fight Center in Greenbelt Maryland and had access to a computer program that would take the data stored on two punch cards and print out the 132 charters on a SDS 930 computer that was used to control the HEAO spacecraft back in the day. When the computer system was upgraded the data was stored on magnetic tape and the list was for US caves over one mile long and world caves over 3 km. Bob typed the list onto a 5.5 inch floppy disk for an Apple II home computer in 1982 and then onto a Cray Super computer in 1983.

A new office with DOD in 1989 brought a new IBM desktop computer and again necessitated retyping the entire list into a new database. Bob transferred the list to an Excel file in the mid 1990’s and increased the catagories he was tracking. The list now includes USA and World long and deep caves, deepest pits, largest rooms, lava tubes, gypsum and salt caves, and underwater caves. Bob retired from the DOD in 2013 and moved to Roanoke Virginia. He kept the list updated until his death on November 30, 2022.

In addition to maintaining the long cave list he was involved in surveys and exploration of large caves in West Virginia, Great Onyx Cave at Mammoth Cave NP, and Gap Cave in Cumberland Gap NP. Bob was presented with the KWI Karst Award in March 2022 and a video of his acceptance talk is available below.